Breaking News
By Susan Pengo on March 26, 2021 Inside Tech

Are you interested in the 5 the most valuable app companies? Great! We have brought up with Insider Monkey’s latest article about these firms. Tencent Holdings Limited ranks fifth with a market cap of $777 billion. It’s a Chinese company and it’s the provider of WeChat and QQ. Also, tencent owns 88% of video game publisher Supercell that can boast with the popular “Clash of Clans”, “Clash Royale” and  “League of Legends.” Additionally, Tencent has invested around $259 billion in several startups internationally and in China. These startups are all fast-growing companies and are involved in entertainment, gaming, electric cars  and social media. The company announced a total revenue of $18.4 billion in the third quarter of 2020. The company’s service business rallied 38%, which represents $10 billion in 2020, and the online gaming sector boosted 45% ($6 billion). Tencent is followed by Alphabet Inc. on the fourth spot of the compilation with an amazing market cap of $1.42 trillion. Alphabet is headquartered in California and it owns Play Store and Android app ecosystem and Play Store. According to Insider Monkey’s investigation, there are more than three million applications on Google Play Store. The worldwide known and preferred YouTube app also belongs to Alphabet. YouTube can boast with more than 2 billion monthly active users all around the world. The firm also owns the most well-known apps, such as Google Maps, Google Play, Google Pay and Google Meet. Google Cloud is also provided by Alphabet. Microsoft Corp. stands on the second spot with a market cap of $1.77 trillion. Microsoft is always in the top 3 when it comes tech industry and now wonder. The company is behind the popular Microsoft Office apps, LinkedIn, Skype or cloud storage OneDrive. In addition, Microsoft also provides business solution applications and server applications. The shares of Microsoft has rocketed by 48.43% in the past twelve months. The company also reported to expand its data center capacity by building two other data centers with a budget of $2 billion. If you are eager to know more about the most valuable app companies, please click and keep up reading the original article. 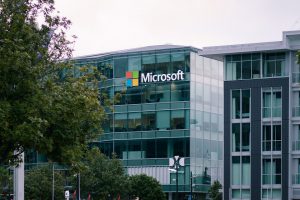